The view is breathtaking and the city is a delight for many tourists. However, San Francisco suffers from the increasing presence of homeless people for three decades. And the situation seems out of control. picjumbo.com / pexels.

AFFLICTION. The latest figures are alarming. The city of San Francisco records more than 9,700 homeless people spread on its sidewalks. The number rised by 30% since 2017. The problem seems insoluble to the despair of its inhabitants.

But this neighborhood that stretches over ten blocks downtown along Market Street, the most dynamic and busy street in the city, lists also hundreds of homeless people installed on the sidewalks. 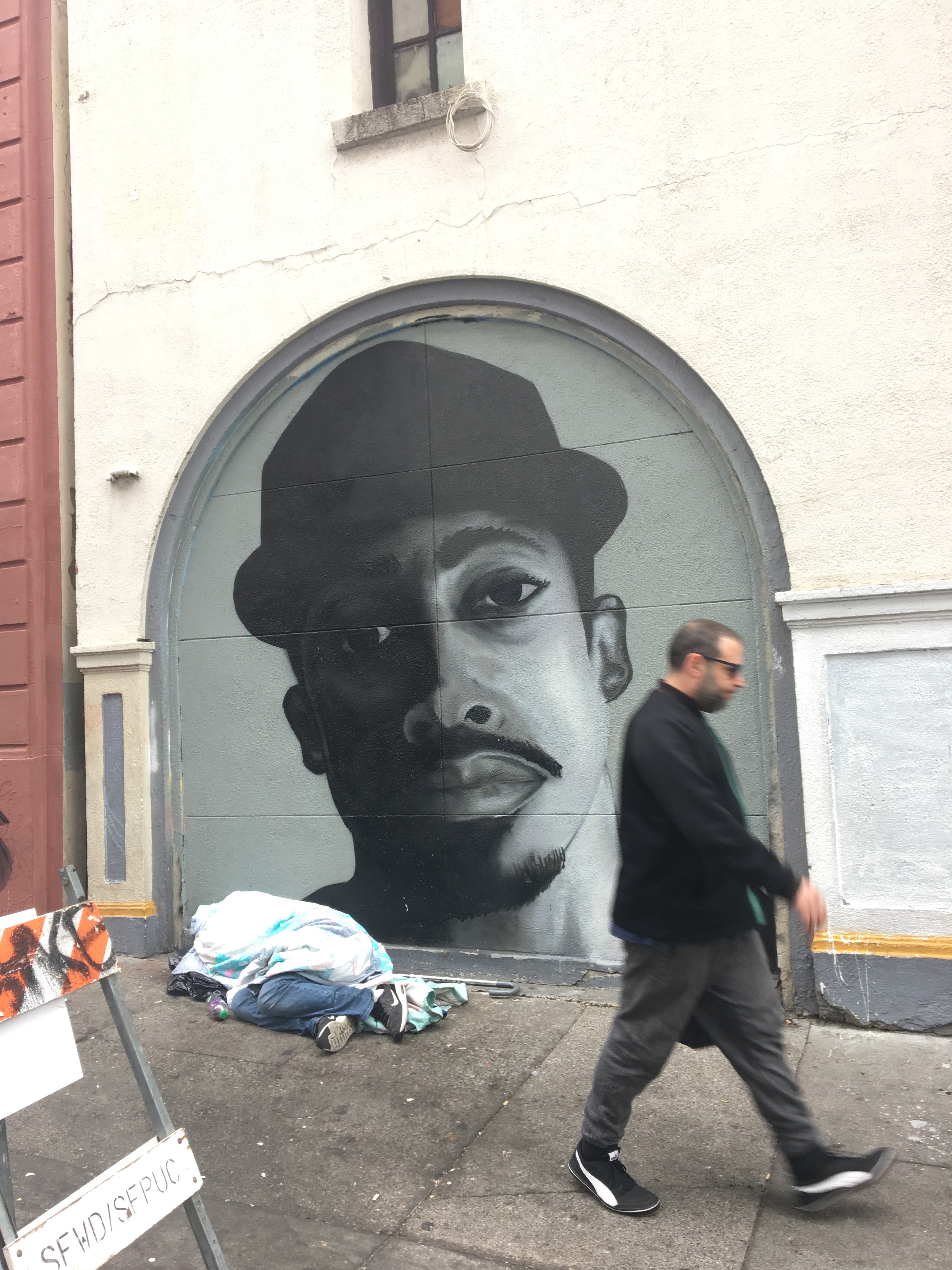 A photo is sometimes worth a thousand words. The distraught look of this man painted on a wall in the heart of Tenderloin sums up the feelings of anger and desperation of the residents. On this Sunday morning of August, it is still possible to move on the sidewalk but in a few hours, locals and tourists will have to walk on the street or cross the homeless encampments. Marie Le Blé / The Daily View.

"Baghdad", "War zone", "Occupied territory"... Nicknames flourish to portray the hell that residents face night and day by the presence of men and women for the most part under the influence of drugs and alcohol, disconnected from the environment around them and totally abandonned to themselves.

The cohabitation and the everyday life are so rough that some locals who feel taken hostage have even recently laid boulders on their steps to prevent the homeless from settling. Boulders that have been removed since.

The rocks are a frustrating attempt 2 do what police & City Hall haven't: keep drug users from turning their streets into a shooting up gallery.

Despite spending more than $300 million annually on homelessness, the Golden Gate City has more than 9,700 persons occupying the streets including those living in a car. The number rised by 30% since 2017.

Grime, urine, human feces, syringes   On this Sunday morning, only a few scattered shouts echo on the bitumen between Turk and MacAllister St. Sidewalks are still battered by the turmoil of the night before.

Residents and visitors are exposed to finding needles everywhere. Last year, San Francisco distributed 400,000 syringes for drug users which means 4.8 million annually. Opponents of this policy denounce the fact that plastic straws are illegal but syringes for drug use are free. Scott K. / Courtesy

Because very soon, human waves composed of helpless people for many dressed in rags, skin covered with brown dust, will be back again to invade the sidewalks. It's like a remake of The Night of the Living Dead movie playing but this time for real.

It is before 9 AM when Mickael a resident goes back to his apartment on MacAllister St. Walking like always in a hurry, he does not pay attention to the man lying near by the front door of his building. This inhabitant is too accustomed to the aweful show he attends every single day since he returned his hometown after several years spend in Europe.

There’s an obvious Homeless Crisis in San Francisco, and Mayor London Breed said she is pulling out of negotiations with the Supervisors Hillary Ronen and Matt Haney over their sweeping proposal to overhaul the city’s mental health care system. pic.twitter.com/Pi4cJZx34T

“Around me, all the buildings have to secure their entrance, said Mickael. All windows have bars at least on the first floor. Otherwise, the homeless ones would settle in the edifices."
A pigeon eaten alive
Other residents are witnessing frightful scenes. "One day, I was coming home from school," tells Scott, a business student. "I saw a man in the grip of drugs eating a pigeon alive. "I've seen a lot of things since I got here, tells Scott, but I must admit that this scene shocked me. There are syringes everywhere. People shoot themselves in the feet and elsewhere in front of you. It is very disturbing."
They can't afford rents
According to Curbed, a real estate and urban design blog network, when asked what prevents them from escaping homelessness, 63 percent of homeless people polled said that they couldn’t afford rents in the city.

This homeless woman has a message for the mayor of San Francisco. pic.twitter.com/IjKscJRCQc

Compare this number to just 37 percent of people who said they were homeless because they have no income.
Job loss, drug, alcohol and eviction
When asked what contributed to becoming homeless, according to Curbed, 26 percent of respondents blamed job loss, 18 percent cited alcohol or drug problems, 13 percent said eviction, and 12 percent blamed conflicts with family or friends who had previously sheltered them.

Another morning on Natoma 8-9th. @LondonBreed This is unacceptable on all levels.

The number of people citing eviction as the cause of homelessness has inscreased since 2009.
In one of the most attractive cities in the United States, this situation plagues the vain attempts of the last 7 mayors's for more than three decades.